Coral reefs are in extreme danger and their survival is uncertain due to human activity.

HOW ARE WE HELPING

We have joined our forces to find the best way to protect coral reefs in the Pulau Banyak archipelago in Sumatra. We design protected zones with fishing restrictions, guard them and construct anchorage buoys for ships. We also collect crown-of-thorns starfish, which are a dangerous and overwhelming predator of coral reefs. At the same time, we are cleaning up the underwater world and beaches from garbage.

MANUFACTURING AND POSITIONING OF ANCHORAGE BUOYS

Coral reefs are being destroyed by many different factors of human activity. One of them is mooring boats using anchors that are thrown and cut into coral reefs in coastal waters. Repeated anchoring literally tears up coral areas, which grow very slowly, in some species even 1 cm in 10 years. Just one-time anchoring of a boat or a fishing boat causes damage that is difficult to repair. In today’s world, “planting” of coral reefs is popular, but basically this activity is totally insignificant and unnecessary compared to the protection of existing coral reefs by creating anchorage buoys based on a concrete cube at the bottom of the ocean, from which the anchor line leads to a buoy above the surface. Boats can then be moored to this buoy without people throwing anchors into the water. This is how we built four anchorage buoys near Sikandang Island in 2019, and we plan another ten in 2020. This activity is carried out by volunteers.

WASTE COLLECTION ON THE BEACHES AND UNDERWATER

Collecting plastic and other garbage on beaches and coastal waters is a very important activity of our volunteers. The reason is not only the good feeling of leaving a clean beach behind, but above all the protection of sea animals, but also birds, crabs, sea turtles, or their mothers on the nests, which often get tangled or die in such plastic and rope traps, or it destroys their natural way of life, leading to a slow tormenting death or inability to reproduce. Many seabirds mistake a tiny plastic for a fish, which leads to other tragic deaths, including their nestlings, which then they feed the ‘caught’ plastics. Likewise, sea turtles, mantas, whale sharks, whales and moonfish die after eating plastic microtene bags in the ocean. Cleaning beaches and coastal waters is one of the ways in which we can effectively eliminate these risks. 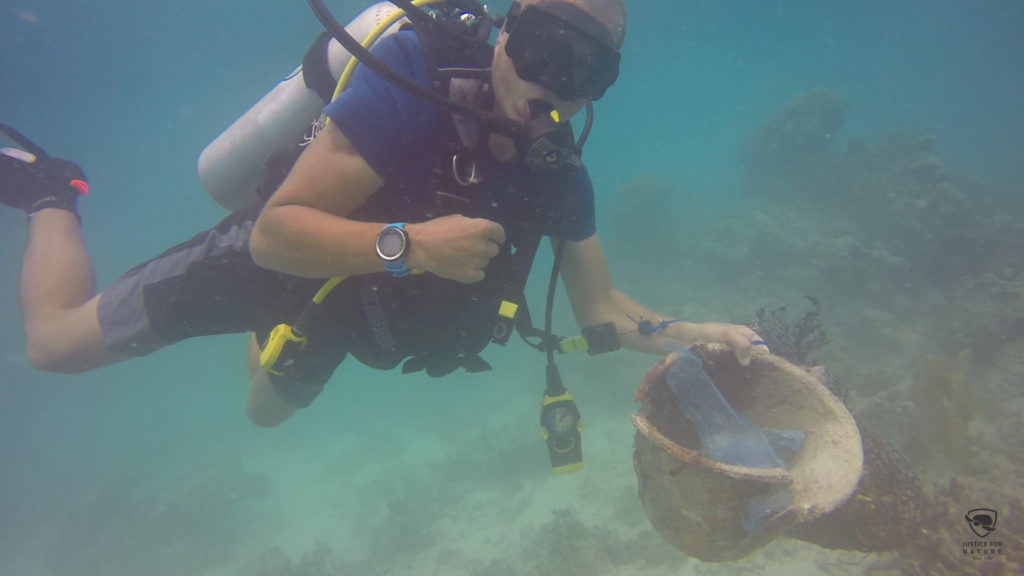 COLLECTION OF CROWN
OF THORNS STARFISH

This activity does not bring any joy to us or to our volunteers, quite the contrary. But the state of the underwater world and coral reefs in the Pulau Banyak archipelago is very serious due to the overpopulated crown of thorns.

Uncontrolled fishing destroys the starfish natural predators, whose ability to reproduce is incredible. One starfish has up to … larvae in life. Literally, an army of crown-of-thorns starfish crawls on the seabed from one coral reef to the next, eating up all the polyps. In this way, only a whitened reef remains behind, which eventually falls apart. In addition, their soft, gooey droppings clog the still healthy corals, which cannot survive in such conditions. The only option in currently is collecting and disposing of crown-of-thorns starfish and giving coral reefs a chance to regenerate and return coral, and eventually other fish, including predators. The mission also includes training for fishermen, school children and a gradual reduction of fishing on coral reefs, but all of this is a long-distance run.

HOW CAN YOU HELP CORAL REEFS?

Coral reefs are endangered by water acidification related to ocean warming, intrusive fishing techniques such as use of large-scale driftnets, bottom trawls or blast fishing, coral mining activities for cement production, and river and flood-brought mud and chemical pollution mostly as a result of unsecured agriculture in vulnerable areas. In tourist areas are coral reefs threatened by ships anchoring and inconsiderate approach of tourists, snorkelers and scuba divers towards them while being one of the most unique, rare and rich ecosystem on the Earth. Any touch or tread breaks and damages coral reef, any souvenir made of corals contributes to their extinction.

Do not tread on coral reefs, you can easily harm them and even yourselves. By doing so, you contribute towards their destruction. While snorkeling, do not stand on coral-made sea floor, do stand only on sandy or rocky one. Is it safer for both corals and you.

DO NOT BUY AND PICK

Do not buy souvenirs and jewelry made of corals, and do not even pick them washed-up on beaches. At most international airports you can cause yourselves a lot of problems by carrying such kind of unethical souvenir. You can be identified as a smuggler of endangered species and face charges dependent on the laws of given country. Coral is kept in CITES’s list of endangered animal species and this also applies to their dead shells.

Some truly stupid tourists are even able to break live coral reefs for souvenirs. Such behaviour is absolutely inexcusable!

DO  NOT ANCHOR ABOVE

Do not anchor the boat above the coral reefs, as this will literally cause disaster on the seabed. Use mooring buoys, tie in to the other ship, or find a safe berth without coral reefs. If you accidentally anchor yourself in a coral reef, do not force anchor winding-up, but dive to it with the gear and release the anchor manually.

DO NOT TOUCH – WATCH OUT FOR YOUR DIVING FINS

Many divers or snorkelers are eager to touch everything under the sea. By careless actions you can seriously injure yourself and while doing so you could even severely damage the coral reef. Watch, admire and do not touch. Also be careful about your diving fins, so that you do not kick the corals with them, thus causing unnecessarily damage. Keep in mind that corals grow very slowly and our tiny momentary inattention could destroy hundreds or thousands of years of natural growth.

CORAL REEFS AND THREATS THEY FACE

The coral reef is a living colony which consists of millions of tiny animals, the so-called polyps, who create their own limy shells, from which many quaint coral reefs are formed. Coral reefs are extremely important oceanic ecosystems. They absorb carbon dioxide from seawater and create an important shelter for marine animals. They are kind of sea nurseries, where not only young fish are growing up.

Where the seas and oceans touch continents and islands, the most important space for coral reef growth is created. Coral reefs need enough sunlight to live, so they grow mainly from the surface to a depth of 50 meters. They also need water pure enough, without unnecessary sludge and small particles of sand, i.e. sediments. Very important is the temperature of the water, which should not fall below 21 ⁰C in the long term and should not exceed 38 ⁰C. Both extremes are dangerous for coral reefs. Areas with such attributes are the richest areas of marine life.

The tiny animals that build the coral reef are called polyps. Polyps live in symbiosis with colorful algae. Algae give the corals their beautiful colors. The coral reef is very important because it absorbs carbon dioxide from seawater and creates a much-needed shelter for fish, fish, invertebrates and reptiles and mammals. Coral reef is basically a huge underwater city full of life.

When there is a long-term extreme water temperature in coral reef area, polyps start to expel symbiotic algae, which live inside their tissues, thus coral bleaching occurs. Because the algae provides up to 90 percent of the coral’s energy, bleached corals continue to live but begin to starving to death. Fully bleached coral reef looks like a white torso of coral skeletons. The coral bleaching is reversible, if the average temperature goes back to normal fast enough. If not, dead coral reefs will gradually disintegrate until only gray-white coral debris or white coral sand is left.