Eye of the Bear Slovakia

At the beginning of 2021, our team continues to monitor the large carnivores in Slovakia and  obtaining the genetic material of these animals for detailed analysis.

In the last 3 months, all four representatives of the Slovak wilderness continue to appear in large numbers on our trail cameras, namely the brown bear, wild wolf, eurasian lynx and the wild cat. We are very pleased that we are able to gather evidence of their existence and migration routes in the Kremnica Hills, which could result in increased protection of this area in the future. These days, a decision is being made to allow or reject the construction of a fenced enclosure (more than 100 hectares of forest), major impact has the evidence obtained by us about the residence of rare species of animals.

However, we have not only experienced joyful moments. During the January and February trail cameras checks, we found that 3 cameras had been stolen again. Another 3 were also stolen from the State Nature Conservation in this area alone. With the previous year, it’s already 12 of our stolen trail cameras – which aren’t a cheap.The most regrettable thing is that some of them belonged to our partner schools of the NEPZ project, which help us with the monitoring of animals all over the world and co-creating additional educational material for young people. A thief is robbing children. We can only guess and wonder who the potential perpetrator is in these cases. Who does not want the public to know what is really going on in Slovak forests and what animal gems live in there? Probably someone who walks regularly through forests outside tourist roads and has no respect even for the brand of SOP (national nature protection), which is visibly placed on trail cameras. We can say that a period of deer hunting is under way and therefore the harvesting of antlers to which only hunters who are currently all over the forests are legally entitled.

Once again, our team has managed to detect illegal feeding of animals with inappropriate food directly under the watchtower. In this case, it was a lot of spoiled cheese and pastries. In the past, we discovered a large amount of chicken and mayonnaise in the same place. According to our findings, the problem of feeding with inappropriate food and especially at an inappropriate time becomes the rule, and it is not one time event. All findings, including evidence and the coordinates of the finding, were sent to the “Green Line” dealing with environmental crime and also to other competent authorities (Ministry of Environment, Hygiene, etc.) They will inform us of further course of the proceedings. Even the Slovak Hunting association itself acknowledged and wrote back to us that: “According to the photographs in question, we have concluded that the user of the hunting ground in this case is the Hunting Company Artemis, violating regulations issued by the chief veterinarian and the local competent regional authority and veterinary and food administration, violation of the provision of § 26, the user of the hunting area commits, pursuant to clause § 78(3)(e) another administrative offense, which can be punishable by a fine from €5,000 to €15,000. “

During the last monitoring in February, we also organized a meeting with two organizations operating in the kremnica hills (OZ Kremnica above gold, OZ Kremnica Hills for life). We exchanged a lot of experience and advice. We also agreed to further cooperate in the fight against the extensive extraction of bentonite, perlite and pucolan rocks. In this way, we try to connect the non-profit sector and local residents in order to protect local nature as much as possible.  Another good news is the agreed cooperation with the Czech company GRIZZLY, which decided to support our organisation in various forms. For a start, they sent us a number of healthy snacks into the field, for our monitoring team and volunteers. In difficult terrain, where it resides in places up to the thighs of snow, we appreciated such a high-energy treat. 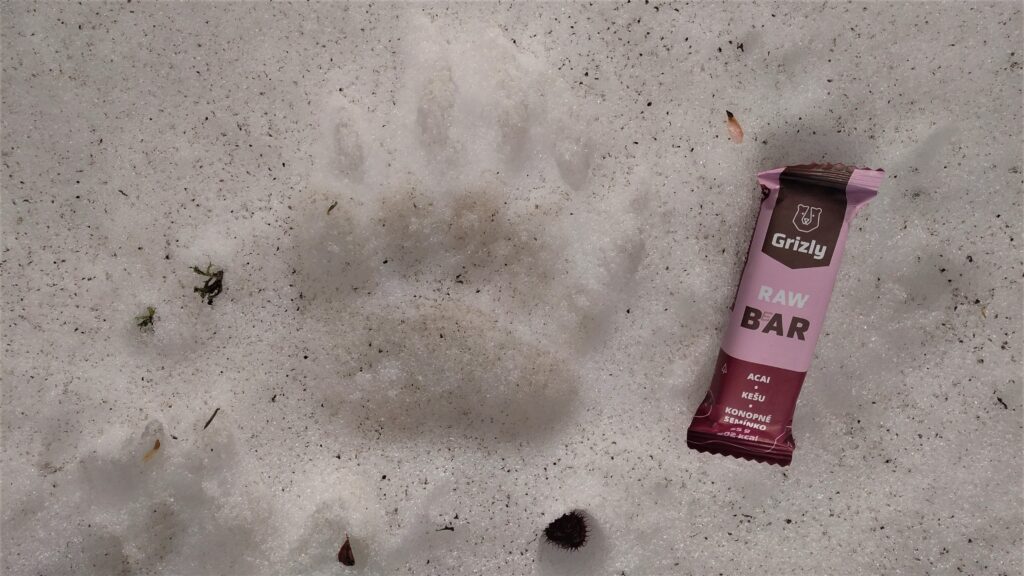 We are going to the next trail camera inspection from 27.3 – 3.4. 2021. Initially, we were also supposed to be assisted by registered volunteers on this date, but due to pandemic measures this will not be possible and so the voluntary program is moved to the summer months. We are already curious to see what surprises and amazing images will await us in the beautiful wilderness of the Kremnica Hills.

MORE ABOUT EYE OF THE BEAR HERE