Private rainforest reservation Green Life was established in 2009 on the borders with National Park Gunung Leuser in North Sumatra, the bohorok region. Currently it has an area of 175.5 Hectares, which are guarded by green patrol. There are 3 rainforest camps which serve as a base for volunteers and watchguard.

Borders of the reservation are visibly maintained. Reservation creates a protective buffer zone between plantations and NP Gurung Leuser. This prevents access for poachers and illegal timber loggers into the national park.

HELP US TO BUY MORE LAND AND JOIN US

The current area of reservation Green Life was redeemed thanks to the interest of the general public, kids and etic companies.

I WANT TO REDEEM A PIECE OF RAINFOREST!

Since 2015 it’s not just adults that joined the redemption and expansion of the reservation but even Czech, Moravien and Slovakian kids who started fund raisings for saving their first meters of the rainforest. These fundraising campaigns were initiated at public schools via the educational project NEZP (The richest ecosystems of Planet Earth) and 2 years of school program rainforest for kids – kids for rainforest. This approach shows adults that kids are interested in preservation of the world’s rainforests and not indifferent towards not just devastation of the world’s wild nature but to their own future.

Let’s show the world an example of cooperation and collective responsibility, that is necessary in order to preserve wild nature, endangered animals and climate conditions on planet earth.

I WANT TO REDEEM A PIECE OF RAINFOREST 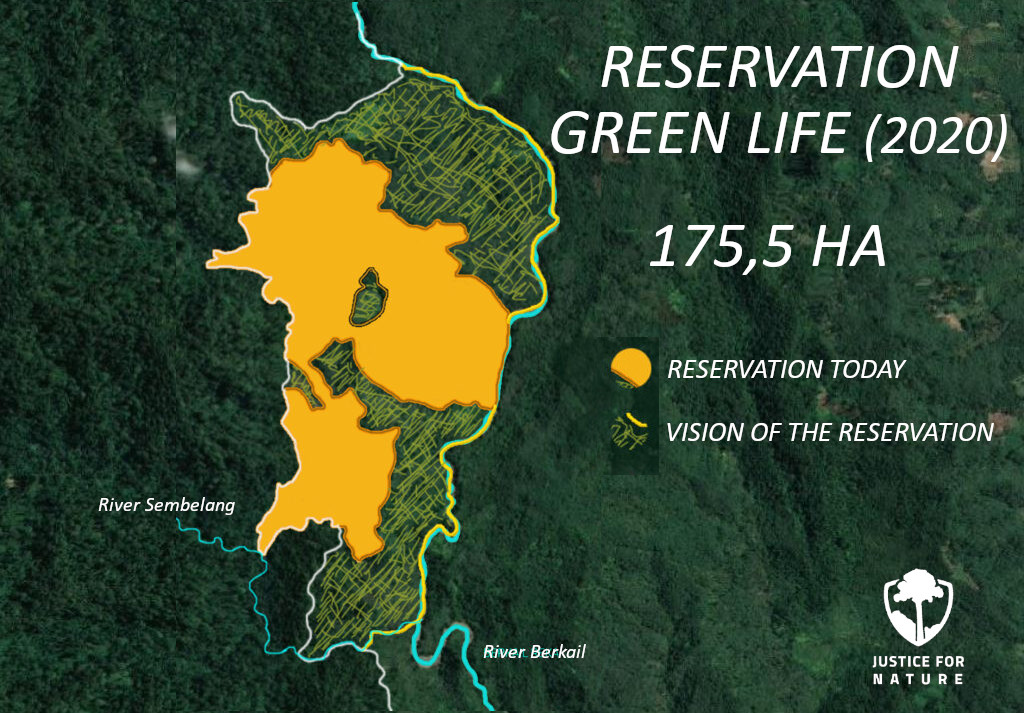 It was year 2004 when Milan Jeglik ventured to Sumatra for the first time with the intention of getting to know the rainforest. His first experience was so intense that it influenced his life, so much so that in the year 2007 and 2008 he epeatedly visited Sumatra and used to return to the rainforest with help of a local guide Ali Rusli to see wilderness, wild orangutans and tigers. In 2009 the essential decision was made to buy 4 hectares of the forest land at the border of NP Gunung Leuser thanks to a company from Prague – Grexim, which provided financial support. This allowed the base of the reserve to be founded and later expanded to 10 hectares during the year and the first rainforest camp was established. In the same year a public association called Prales Detem (Rainforest for kids) was founded with Pavel Bakovky as a president and the first volunteer programs started in 2010. In 2012 Intermedia Grexim handed over the whole agenda to Milan Jeglik who became new president of the association which was ncorporated in to a non-profit organisation in 2014. In 2012 Zuzana Kolouskova joined the project and eventually became a vice president. In the following years a big progress was made in the project Green Life and its reserve was expanding step by step from the support of general public donations. Between years 2014 and 2017 another two rainforest camps were constructed in the valley of river Sekelam. In the year 2019 the reservation Green Life reached 121 ha of redeemed land.

OWNERSHIP OF THE LAND

In 2019, a major change in owning the redeemed land of reservation greenlife took place. The original owner Ali Rusli was suspended and removed from the project for unreliability and misusing his powers as a president of YHUA (Yayasan Hutan Untuk Anak – rainforest for kids in Indonesian) and precautions were made so that all the land is solely under the ownership of non -profit organisation YHUA where its constitution was rewritten. All with agreement from the renter of the land Milan Jeglik. How does it look with the land since August 2019?

WHAT IT MEANS TO PROTECT A PIECE OF RAINFOREST GREEN LIFE

WHY IS THE RAINFOREST DISAPPEARING?

It’s important to look at this serious problem in context. Rainforests started to be massively cut down roughly 100 years ago. For this time period, human ability to destroy multiplied drastically using technological advancements, proportionately to demands of growing world’s population.

Today we have a number of main reasons for the destruction of rainforests. It’s a demand for tropical timber, wooden coal, burning forests for acquiring farmlands and agriculture, where land becomes palm oil plantation or soja (mainly used as food for farm animals), eukalyptus (paper) or timber. There is a concerning problem in Africa with manufacturing wooden coal from tropical timber. Very serious problem is illegal mining of minerals such as oil and expensive metals (gold) Destruction of rainforest intensifies by world demand for commodities listed above, with which the global market is doing business with. Supervision and control of the illegal mining activities and burn-down of rainforests is left to criminal organisations, which supervise the whole rainforest areas and control deforestation in the name of business and trade markets & brokers.

If the international trade is under threat from eco activists, similar minded individuals or groups, then these criminal groups are on a mission to resolve this threat. Using all means necessary even by kidnaping and murder. It is very easy to transport all these minerals anywhere these days thanks to well established shipping industry that helps speed up the destruction of rainforests in Amazonia in South America, in Congo Basin in Africa, or in Southeast Asia such as Indonesia and Malaysia. At the end of this chain is business man, trade brokers, bankers and of course consumers, who pay for rainforest destruction by buying the above described commodities. Circle is complete and internationally organised crime accomplished. Now you know the connections that relate to rainforest destruction.